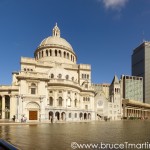 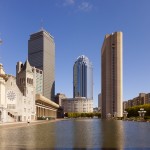 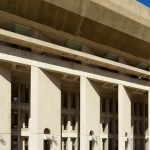 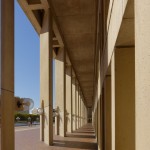 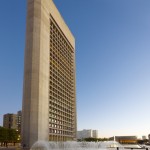 “Structure is obvious, basic and irreducible. It is the perennial source of strength, the spring of clarity. Even when it may seem ugly, it is never false”
Araldo Cossulta
Progressive Architecture October 1966

These words, taken from a essay called From Precast Concrete to Integral Architecture by Araldo Cossulta, at that time, a partner at I.M. Pei & Partners and the lead architect for the architectural masterpiece, the Christian Science Plaza at The First Church of Christ, Scientist, Boston, Mass. This article brings the reader into the thought process of what one of the Sixties’ leading architects was thinking. The results of his beliefs can be clearly seen with the Christian Science Church Administrative Building, the Church Colonnade Building, The Sunday School Building, The Circular Water Fountain and The Reflection Pool as they join to become the Christian Science Plaza.

Here beige reinforced concrete is molded into novel shapes that use shadows, space and light to convey a new truth about what architecture can be and how it is perceived. The plaza itself, almost European in feel, removes the viewer from Boston’s urban setting giving the pedestrian a place to contemplate what’s on their mind or catch up with an old friend. From within the plaza, the shallow pool reflects each of the separate structures to double their visual impact and reinforce their physical intent. The structures themselves address different needs with contrasting solutions while maintaining a harmonic balance. The Sunday School gives homage to the earlier Mother Church extension with it’s curved shape connecting the new section to the old. The Colonnade Building with its low height, long length and large rectangular columns brings to mind a modern, distilled, unadorned version of some ancient Mediterranean temple complex. The Church Administrative Building has the shape of two upright books put side by side with each binding facing opposite ways. Here the deep reveals of the windows catch light to create an added three-dimensional quality in what is a relatively thin structure. So thin that the sky from the opposite side can be seen through the building when commuters are driving in on the Mass Pike as well as many other surrounding points of view.

Walking about the Christian Science Plaza, a viewer soon sees the truth of what Alarado Cossutta was saying in both his words and designs.  It is a combination of buildings and landscape of it’s time and beyond.